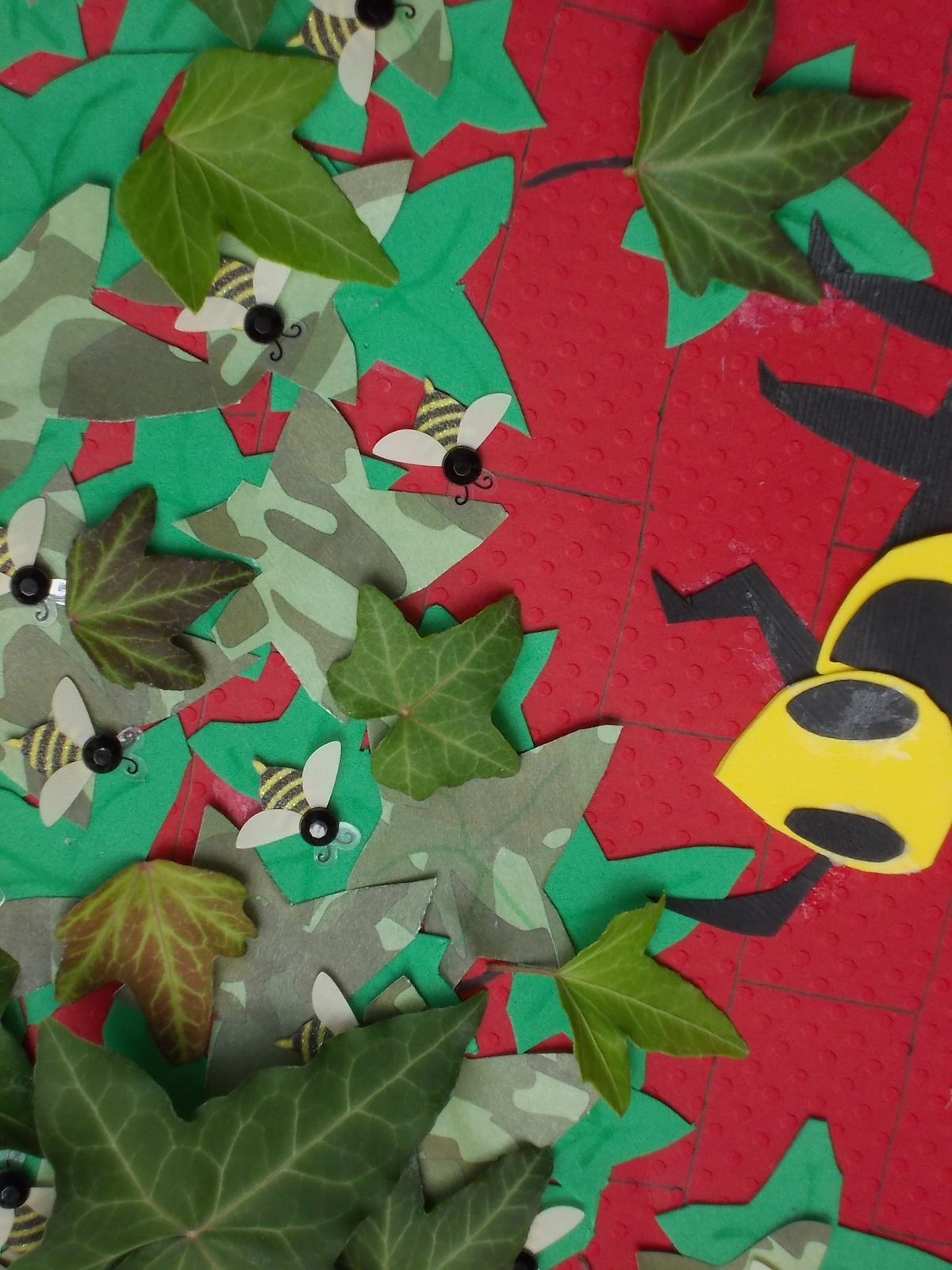 Ivy and Brick (excerpt from "Singularity")

The green of the ivy greened and did not red. The red of the brick wall reddened and did not green, nor did it whiten, nor yellow. The ivy was not cement, nor was it metal, nor rubber. The ivy hedera, being water and sunlight, soil and dead things life-bending living greened. The plant affixed itself to the red brick lightly, drawing some nutrients from the soil beneath the building, some nutrient from the building itself – with soil and building seemingly inanimate. The ivy and the building were at odds with one another, though a glance would signify that relation – the brick feeding the ivy, the ivy providing shade and a quantity of protection from the elements for the hard, hardly compromising material. The ivy was what it was and was where it was, and so the ivy was not in the position of the building precisely, nor was the building located where the ivy was located precisely – the two persisting with one another. The building was unable to be ivy as certainly as the ivy was unable to be building, though the being that comprised them might be exchanged. Their position as instances in the organic universe were set and temporary, beside one another, and each refused the other admittance to what they were – the ivy too soft to be brick and the brick too hard and scantly compromising to be ivy. The fixed, temporary change they shared, though the ivy and the brick not admit it. The red brick would not green, nor become that color but for the brick becoming other than brick or the red other than red. The ivy would remain ivy for as long as it was provided with sunlight, water and nourishment, and in one sense at least the ivy was more capable than the brick: unmolested, it grew ivy. The two opposed one another in many ways, but most significant was their sundering, an opening. The ivy yielding and fragile the denser brick might destroy, brick able to crush ivy with the building razed. The ivy bent its way onto its timely space, as if along a fragile iron curve. The brick might be loosened by the ivy and fall; the ivy was the living universe and where the brick might abide nearly unchanged, the ivy would live, grow and perish. Both alterable and not insignificant, the pair shared a space and were similar how they demarcated one another, themselves. The spot where the ivy lived ivied and greened and yielded and no matter how willed the brick, the brick would not change to ivy, without ivy permitting the alteration. The ivy became hegemon of ivy where that ivy lay; and the same was true of the brick. The two might and undoubtedly would change, and because the ivy might grow and because brick might become the ivy with ivy permitting, the two broke into a bond. Each was warp and weave of the what each was, each being reaching by warping the sustenance what it was. Such twisting by self-motion pressing itself into material and organic vitality met one another there, and both refused the other, each thus breaking out into view of Others who witnessed their import. Both engaged in refusal, the two sundered the possibility for the one to become the other, they breaching their current place together.

The one was more sure of survival, change coming slow; the other fragile and would not survive ravages that the one might withstand easily. One might believe that the sundering of each towards the view of Others was unequal, that the more capable the sundering, the more ivy or the more brick might survive, and certainly brick twisted its place woven to space denser than ivy. Durability meant survival to both, yet the organic ivy altered itself and grew while brick lay dormant for more capable organisms to view and to alter, thus relying on Others so homotherian it was. The vital ivy was then more capable and it did manipulate the brick. It was thus that these two continued what they were, and thus that they sundered themselves, though the ivy be fragile and yielding and the brick be firm and brittle. They lived near one another and sundered their place so long as neither broke their agreement, betrayed or crushed the other. The two distinguished themselves as demarcating entities, breaking themselves lucent upon the vitally organic and living universe.

The ivy leaves possessed points fat and vibrant that folded partly into the shape of a cup with two curved connections at leaf’s stem. Some leaves sheltered giant leopard moths and danced when the rain fell; others reached out towards Sol's light in order to receive the day that other leaves needed; still others sheltered the building from elements while the shy and retiring among them remained housed beneath the larger leaves, awaiting their duty to supply the collective its day. More than the sustenance taken; more than that the two seized space and more than that these two were, materially speaking, themselves four dimensions – more than all of these – the sundering of what they were and what they were not rent them position as the organic universe. The ivy crawled along the brick as it had done for decades, carving sections of red and yellow unit building while steadily imposing itself upon the brick in a disruptive, organic embrace.

The building, immovable and steadfast, met the squeeze of ivy impassively. Still, the diminutive sundering of the ivy continued its imperceptible assault. Comprised of red units at its base, above a certain line the building-color abruptly rendered yellow, as if a royal foundation surrounded a beaming, joyful expanse of robust living-space. The green ivy had surrounded the foundation of the building almost entirely and the plant inched its way skyward up along the stony block.The building itself fulfilled its requirement to be a sturdy place where its inhabitants lived, and so it was its own. Authentically a piece of being-for-Others pressed together in such a manner that its vigor became the guardian of the movements of the homotheria within, the building itself protecting not only the inhabitants who had made the edifice their home, but the many documents and offices of the mercantile, homotherian undertaking. The first three floors consisted only of offices and a long, high-ceiling hall where vendors offered wares. The diminutive beasts that occupied it busily occasioned themselves with the bustle of paper and guidelines and imperatives that regulated the motions of their kind within the larger city. Foodstuffs and raiment and treatments of ailments with accompanying animals; dining areas as well as beds and recreational activities within made its existence out of utility and aesthetic given from and presented only to the homotherian being inside, sundering and bringing to luminescence its end. In truth, the building was itself an organic part of the larger organism of homotheria. It became allied to these creatures because it owed its existence, its very inception, to them. It was for them only, though the rending that sunders preceded it and its significance radically, and as the ivy and the brick had joined in organic union, so did the homotheria and the building accomplish a similar relation, still differently.

The inhabitants were the gods of edifice and these homotheria were many in number, varied, but should another species observe them, they would appear to be radically similar in form and in demeanor, in community. They sunder themselves as ivy and animals and objects do because the rending precedes their advent as a species. Many of the homotheria inhabiting the building were occupied in the service of other homotheria; as wild creatures forge hierarchies so do these separate themselves from one another in union. Each homotherion had its place therefore and atop most of these was a man with raven hair and umbrageous features.