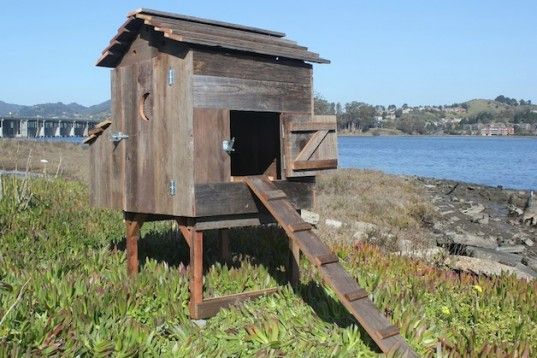 Kakos the Chicken (a nihilist's fairy tale on the world of chickens and men.)

The chicken was stupid. It had no idea what to do with itself. It knew little other than itself. It had many projects of great and significant self interest, but it had little awareness of them, only that of him, the chicken. Indeed the chicken could find no other real manner to think other than to think itself.

So it came that there was no other. And what better manner to teach humility than to teach insignificance in the face of other things existing? But there was only the chicken and his friend chickens, each of them exceedingly similar. Each knew nothing about the other that did not concern himself. So each chicken lived in his own world, accepting no other notion of anything else existing but himself, and all was well with the world of chickens.

One day there came a chicken most different from other chickens. This chicken's name was Kakos. Kakos was not only an uncommon chicken because he had grown a red beard, which he thought physically impossible for chickens, but because he claimed to know what no other chicken knew. Kakos the chicken knew how to save all chickens from themselves. Yes, Kakos was an enlightened chicken, and he knew what to do. He went from his divine perch to the common land of common chickens. Kakos performed miracles.

He revealed the dirty to dirty chickens, and bade them clean themselves. Those who would not clean themselves he tortured into submission. He taught the lesser intelligent chickens, which was practically every one, how to groom and respect themselves – only themselves. He cured blind chickens who had never been blind and even raised one chicken from the dead, a chicken who had not been dead or dying. Still, Kakos' work as the enlightened chicken was not yet complete. He needed a gimmick, and he thought he had the perfect one.

Kakos gathered the most supportive chickens of his flock, those being the least intelligent, and told them that he must be sacrificed. He said that one day he would have his head removed for the sake of all chickens. His loyal followers were shocked and saddened, but they believed so in him that they accepted the event. Kakos took it upon himself to arrange his own demise. He horded food, became a glutton and refused to exercise. He swore the most obscene profanities at the farmer and called his daughter an obese moron. He pecked at the farmer's wife's feet and even managed to defecate on the farmer's kitchen table. And with time his efforts arranged his death at the hands of a greater power.

One day the event came. The farmer chased Kakos throughout the chicken-yard for nearly twenty minutes. All the while Kakos called out that he was being persecuted and that he was the king and god of all chickens. All at once the farmer caught him. It was finished in an instant.

Now, chickens are not very intelligent and therefore not insightful creatures. So the memory of the death of Kakos lasted not more than three seconds. And the land of the chicken became much like it had been before Kakos came along. There was one chicken who thought merely of himself. And he knew not that anything else existed beside himself. He cared not at all for those who went before the great axe. Indeed he did not even notice they had gone. He paid lip service to the sect of the chicken Kakos, which preached equality for all chickens. But as chicken-nature runs counter to egalitarianism, each chicken concerned himself only with himself. And each chicken was very much just like him. And all chickens were the same and without awareness. And all was well with the world of chickens.