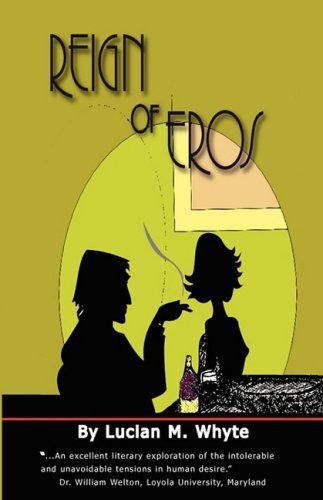 Excerpt from "Reign of Eros"

Each woman danced her turn the shape of man. Dispassion was her first partner, Sensuality her second. Umbrage came, but he was inelegant and without rhythm. Fascination was her third partner, but he was overpassionate. Acquiescence arrived in the end, and he said “No need to falter, lover. No-one seeks to harm anyone else. Twilight is our dawn and we have no choice.”

The rat-tap of the pin on the metal-armed mechanism paid ping the sound-tap-rat-batter and the fleshy pink-skinned arms, nearly silent among the din of the assembly, quietly adjusted the bottles that clinked in a military line along a rubber serpentine path. Into the cardboard tank they marched. The wooden crate beneath the cardboard boxes, filled to bursting with those alcohol-soldiers, groaned a complaint as the weight of the boxes pressed toward the ground in an attempt to hug an earthen skin that lay buried beneath the many floors of steelgirded concrete. As the inebriate soldiers marched along the highway, the hum of the rubber on cement and the creak of the auto-chassis joined the ping of the bottles and the smack of a metal-clipped leather strap. The swish of the steel-linked chain chimed in on occasion, and the irregular jump of the cardboard-box pallet that hadn’t been properly secured joined the would-be noisome chorus. This emergence of myriad clamor might have come to something, had their rhythm regularity, but the unpredictability of sounds produced a mere racket without method or consistency, yet with calculating lunacy. The meter of mechanistic sounds rang true its nature: an arhythmical mass of mere sound, no voice. Occasionally, the slowing or the stopping of the vehicle would join together these objects, producing a unified rattle and these few moments gave a brief illusion of non-sustained unity.

The truck stopped at the highway exit, and the hum of the wheelrubber joined again the cacophony of clinks and rap-taps that made chorus of cardboard and scotch-filled glass. Once, when the truck nearly broadsided a rash BMW, the bottles panicked and let forth a leaping shriek as the bed of the vehicle leaned slightly toward the left. These soldiers calmed themselves, prepared to surrender their vitality quick, should the need arise. Sounds ceased when the truck slowed, reversed slowly into a waiting, raised metal bay into which vehicle and contents would move, the regular but still arhythmical noisome tone of warning signaling the end of the chorus of potables and edibles. When the tone ceased, the grating rush of metal wheel on steel track signaled the opening of the truck’s close. The wooden-x-pallet again groaned as two thick steel appendages made fork lifted the precious glass-mouthed liquid back into the storage-cavern. The glass soldiers abided their orders and remained safe within the thickpapered boxes, awaited further commands. Yet, they occasionally made the same ping and pak as Heilmann’s Scotch found its resting place, stationed before the kitchen’s back door.

What then arose was a crackled murmur from within the busy eatery. There were clanks and slaps of plastic certainly, and so there was a similar chorus of objects, but joined with the impersonal noise was an organic murmur that appeared a cackle. The kitchen-commandant made the demands that turned to deeds in the minds of inferiors who carried the dishes and froze the meats, and who bore the boxes stained with the mark of Heilmann’s Scotch to the bar where the slip-slip of shoes wet with milkstain and asphalt-black and the rat-tap of glass abound in ice mingled with the organic murmur arising from the growing crowd of inebriants and toil-wearied urbanites. A cardboard container shuttled its way open, and one soldier was lifted his command out. He was the first to expend some of his precious inner vitality in the war against sobriety. He leaned forward with assistance and spat from his glass mouth thick fluid golden brown. His vitality floated ice tents smooth, one crack then silent diminishment, as an inferior ferried-quick the potable inebriant to a much too sober urbanite. The chorus of objects and the organic murmur with their arhythmical tones, sounds and paks like the mind and ravings of his sober consciousness, a condition which must be remedied.