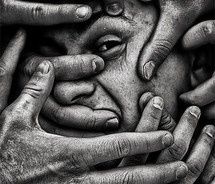 Old John: Up Your Nose, Down Your Ears - Throatpacked - Never Enough, Never.

The man said in a simple and unadorned tone that He would save the world, if only the world should listen. The soft-spoken masculine words explained. “Compassion and acceptance.”

The commercial-confident voice said that the only way to find acceptance from god is through the holy Christian scriptures; these tell the story of a benevolent deity, coming to earth and giving an opportunity to men to become good, but only if one accepts the fact of the resurrection.

John needed never leave his bed, at that moment became a good man.

He listened to these same words for several hours before slowly sinking again into happy somnescence. John dreamt of being carried along on a ship built exclusively for him. He looked around, observed and found no person at the helm; he was afraid because he knew nothing of piloting. A storm suddenly arrived out of nothing and tossed John’s diminutive craft; he feared when he saw his shipmates, the disciples of Christ, panicking and tearing at their hair like fear-filled women, but quickly realized the ship was guided seamlessly through an opening in the rage, taken to calm still and safety. The disciples remained fearful and wondering until he calmed them by explaining how god had saved them. They thanked John for his words and he and they talked of moving mountains. When John awoke nine hours had again passed. Having taken some good portion of rest from his dream, he turned on again the radio, rotating the black dial toward the one end another other end of band. He found men and women talking and singing to him about peace during war. They mentioned neither god nor Jesus, and their words were interrupted by short declarations of need for everyday items after which they insisted that the only way was the one of least resistance. They suggested one accept the flaws of his friends and relatives, and John realized that there were things that he was unable to change and he ought to accept them, that there was courage needed in order to change things that he was able, that wisdom allowed him to understand the difference.

Again turned the black dial and John found more persons stating almost the same things, but he knew that these persons did not have Jesus like the others did. When John again dialed he found a very similar message, but differing in tone and inflection. He arose from his bed and found his space turned immaculate. The dust had been removed from most of the furniture, the kitchen cleaned. Even the refrigerator possessed fewer contents and John’s bible and reading materials awaited him on the dining-room table. Ruth and Nick visited him on that day, and together with Him-hanging-on-the-wall ate little of a hearty meal.

The three agreed on the presence of the holy spirit and the resurrection of Christ, and they lamented the lack of Christian culture on television and radio; the internet still worse. These efforts and thoughts and meanderings about once more tired John, but he found comfort in his sleep-time. Many hours passed while John’s needs were met, and when he was strong enough to exit his room, he sat again in his seat-station and spread himself about the channels offered. He turned to his now-favorite station and watched.

“Those who call themselves spiritualists are nothing of the kind,” said preacher Marvin, a Jackdaw. “They have false visions and hear voices from their own heads. Not from god.”

John watched as a fattened Jackdaw jumped up upon the stage and shook his head in emphasis. Dressed in the finest of cotton light blue and happy gray, “The only way to hear the voice of god is through the gospels…and Jesus himself,” he repeated, the crowd grinning approval.

Marvin cried twice during his sermon and with his words completed, dancing a brief step in a stadium howling with observers. John spent three hours watching different episodes of reverend Marvin, as he liked to be called, and fell into a nap of two. When he awoke, again dialed the channel again and found the story of a man who fought the forces of evil. These evil men were organized and their leader was terribly aggressive. He believed in no political force of Capitalism and his conception of ownership belonged in the world only as one aspect of a polity. He claimed in no way to believe in the greater good, nor did he have the faith of free will, and one could see clearly that he was a tyrant, that should such a man gain power all liberties of Jesus and freedoms of Christ would come to an end. John turned another channel and watched a documentary on the life of Christ where several experts testified to the authenticity of the shroud of Turin. The scientists endlessly analyzed the cloth and argued that it clearly dated to medieval times, a position which true believers thought inconclusive. During the program, many brief solicitations caught John's attention. There were promotions for the United Church of Twenty-first Century Christ where bands of rock-and-roll musicians and pop-singers sang the need for deliverance. Special church services were available for younger parishioners. John was not very interested in such things and he had little appreciation for the way youth talked so casually about faith, but he was happy at the much-needed spread of the Word. One news brief beckoned him to come to the Holy Christ Moment of Amusement where believers welcome rest, bible-reading and retreat on waterslides, roller coasters all the while stuffed to the eyes with tater-tots and chocolate-cheese dips. A shooting gallery provided diversion for the more assertive. John did not appreciate this park so much, but he was again glad at the much-needed spread of the Word. One more pitch told him about The Church of Christ’s Gathering, reverend Marvin’s new flock, an assemblage of middle-aged and older persons who came together in order to find solace from a Christless world. He liked the idea of contacting this new church, though he belonged to another.

John again turned the channel and found another film about a suburban Christian family caught in a double-bind between a secular school that wished to teach evolution and two neighbors who attended church services irregularly. The young man of the house, a boy of roughly fifteen years, wore earrings and listened to heavy-metal music. John liked this film and how the family came together under the aegis of the preacher-father at film’s end. He was delighted to read later that the film had been made into a television series, the family members available for purchase as soft, cuddly sleep-buddies. John felt restless, and, though he had slept his fill for that day, he walked onto the street in order to stretch his pain-filled legs. A period of movement made better the feeling in his thighs, but he was unable to shake away the discomfort. He slowly made way around his block and entered a Hispanic dollar store. He was comforted by the crucifix on the wall and the many versions of cards that sported paintings of Jesus and sayings of the Master. John read one about a sheep and a lion. He was not certain that he believed this shop was truly Christian.

John wanted to drive to the suburbs with Nick again. He wanted to spread the Word.